After 20 long years away, I finally returned to the most magical place on earth: Disney World.

It’s been a dream of mine to experience the new Wizarding World of Harry Potter parks, as well as the adult version of Epcot [aka drinking around the world]—both of which were not available to me when I was 10.

Not only did I accomplish both goals, but I did so with some of the finest ladies I know: Mallory Lane and Liz Johnson, along with my mom, Catherine, and Mallory’s mom, Valerie. [Yes, we 30 year olds went to Disney World with our moms… and it was AWESOME.]

Mal and Liz are two of my closest friends on the planet. Sorority sisters and basically real life sisters, we were some of the only gals from our pledge class who made their way to the East Coast after graduation. Once firmly planted in D.C., Pittsburgh, and New York, we made it a priority to convene together at least once a year in February for some college-level shenanigans and warm-hearted reunions for what inevitably became known as “Elizabash”—so named because Liz’s and my birthdays are just two days apart.

Our weekends together were somewhat legendary and were the glue that kept us together during those post-college slumps. They without a doubt solidified what we now know to be a life-long sisterhood. 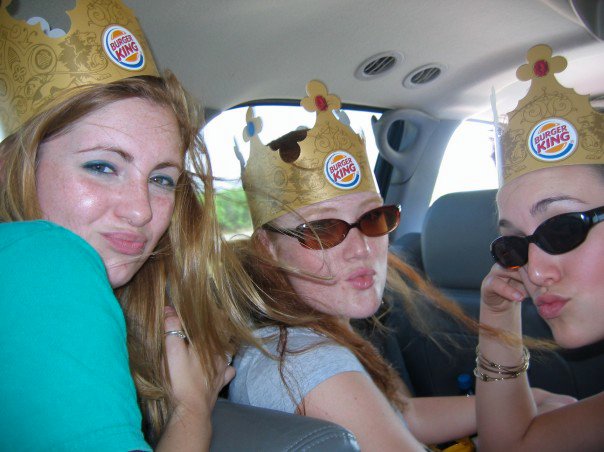 And then I had to go and ruin it all by moving to Colorado. Thankfully, our wedding in 2013 and their weddings just this past fall ensured that the “Elizabash” spirit remained alive and well. But given that we were all turning 30 in 2016, the wedding default mode simply wasn’t going to cut it. For something this momentous, we needed an Elizabash: Disney Edition.

All it took was one mention of Disney World and Harry Potter, and these two girls jumped at the opportunity, moms and all! [Have I mentioned how much I love them?] Here’s how the weekend of a lifetime went down…

We began our adventures at The Wizarding World of Harry Potter in Universal Studios. As soon as the East Coasters landed on Friday morning, we were off to the park for perhaps my most anticipated experience.

The girls can attest, I squealed as soon as we turned the corner into Diagon Alley. It was like stepping onto the set of the movies but better because every nuance was alive for us to observe and admire for as long as we wished, which was imperative as we all realized that each hour the park revealed a new detail previously undiscovered, such as the fire-breathing dragon, or the interactive wand features, or the many quirky shop names.

We immediately made our way to the Leaky Cauldron for some lunchtime fish and chips alongside some coveted Butterbeer [which, in case you were wondering, tastes like a creamier cream soda], pumpkin juice, and Dragon Scale beer. Drinks in hand, we made our way through the various stores, lingering to admire their many trinkets and exceptionally executed corners. Not being a roller coaster person, I opted to spend some time soaking in the atmosphere, drinking a Wizard’s Brew and carefully selecting my wand at Ollivander’s [I chose Luna Lovegood’s, because we Ravenclaws have to stick together] while the others went on the Escape from Gringotts ride. 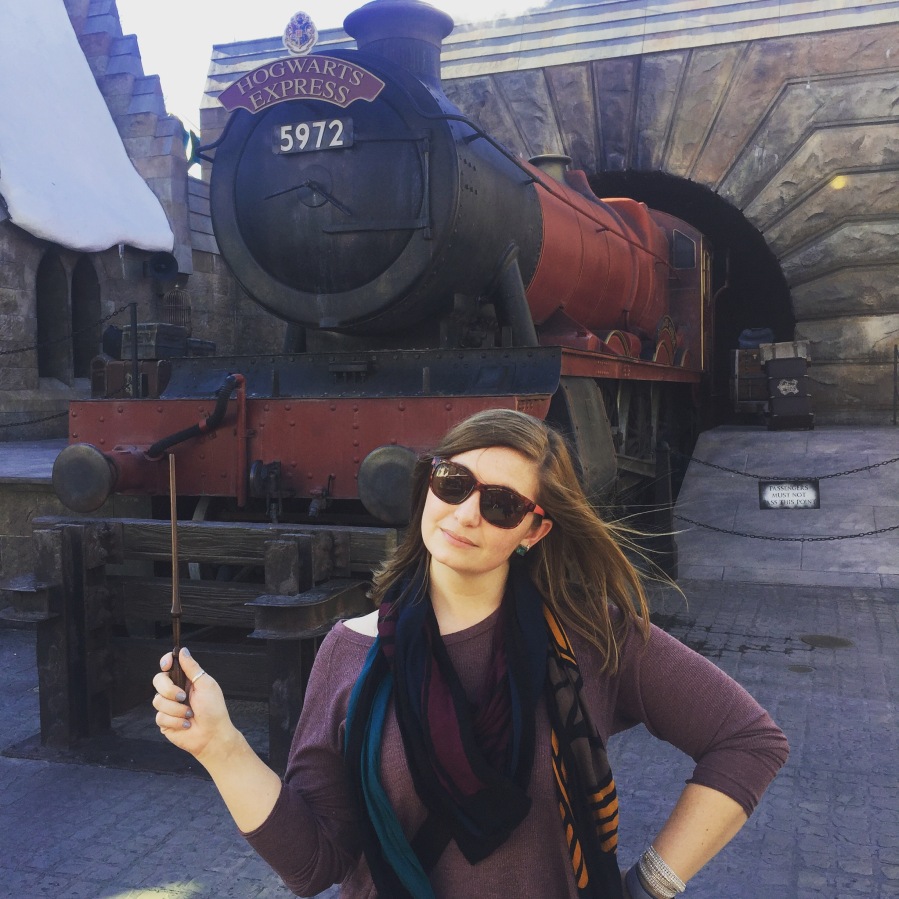 It was then time to pass through Platform 9 ¾ and board the Hogwarts Express for our interactive [and incredibly entertaining] transfer to Hogsmeade and Hogwarts. It was probably one of my favorite experiences of the entire trip.

While my mom and Mal rode the Dragon Challenge rollercoaster, Liz and I purchased another Butterbeer, took in an a capella group, purchased chocolate frogs and Bernie Bott’s Every Flavor Beans from Honeydukes, and meandered through the idyllic, “snow”-capped Hogsmeade village.

The highlight by far was entering Hogwarts for the Journey through Hogwarts experience. I won’t detail it too much, but let’s just say I saw the pensieve and had a dragon breathe on me. IT WAS EPIC.

I loved the ride so much that the rest of the group insisted that we go back to Diagon Alley so I could experience the Escape from Gringotts ride – a decision I am so glade they made. In the end, I think what impressed us so much was the detail of it all – even the lines of the rides were captivating enough to make you forget you were in a line, and in many cases, you didn’t even want the line to move forward for fear that you were missing out on all of the many features and hidden elements of the setting.

The fangirl in me could have easily spent multiple days amid the magic of it all, but alas, we had dinner to eat and new places to try. That evening we hopped on a shuttle to Disney Springs [somewhere I had never been], where The Hangar dished up delicious cocktails and some confusing adaptations on the pretzel [more like pragel…] and Fulton’s Crab House brought us to our comfort zone with shrimp scampi, crab cakes, mussels, and a divine corn and crab soup.

Exhausted yet excited, we greeted Saturday with a lot of coffee and Micky Mouse waffles before darting off to our destination of the day: Epcot. We had one mission in mind, and tht was to drink around the world showcase [and somehow survive doing it].

Margaritas, nachos, and Three Caballero rides in Mexico; glacier shots and Frozen memorabilia in Norway; plum wine and dumplings in China; Glühwein, Snow White, and pretzels in Germany; limoncello, white wine, and handsome Italian flag throwers in Italy; mash-up a capella singers in America; sake and green tea smoothies in Japan; Moroccan wine and plenty of kebab and hummus in Morocco; pink champagne and ice cream martinis in France; Strongbow and Boddingtons in the United Kingdom; and, finally, Labatt’s and maple whisky in Canada… it took us nearly 9 hours to visit 11 countries. Let’s just say we had perhaps a little too much fun. 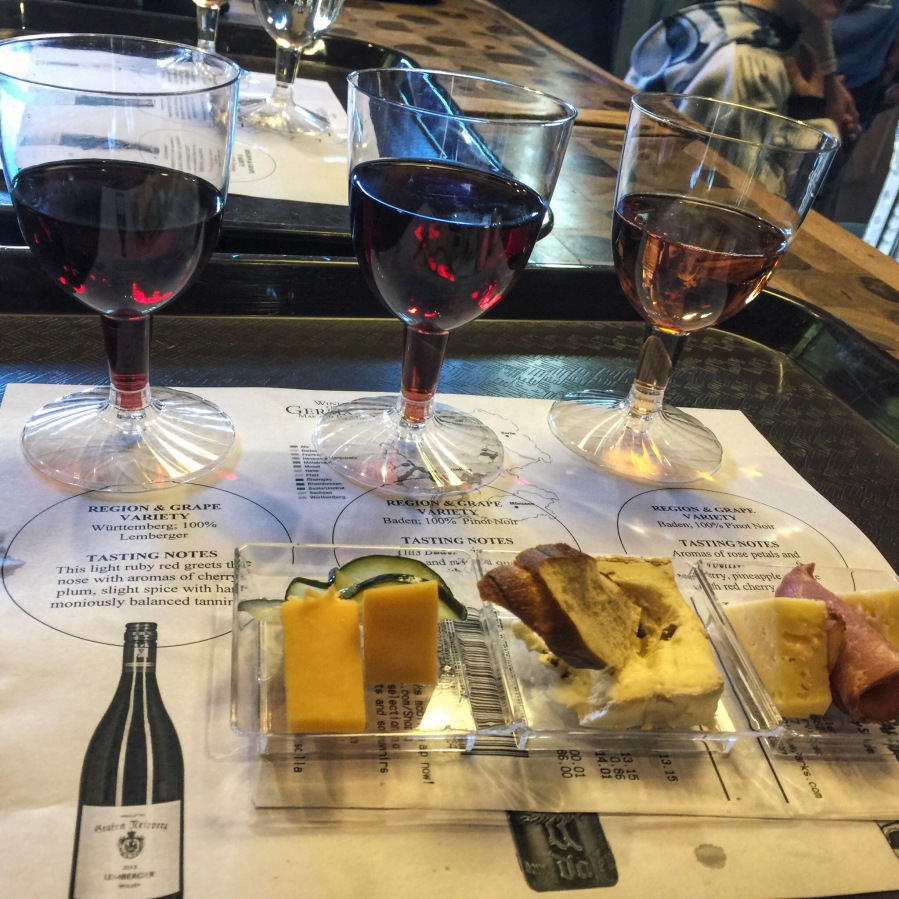 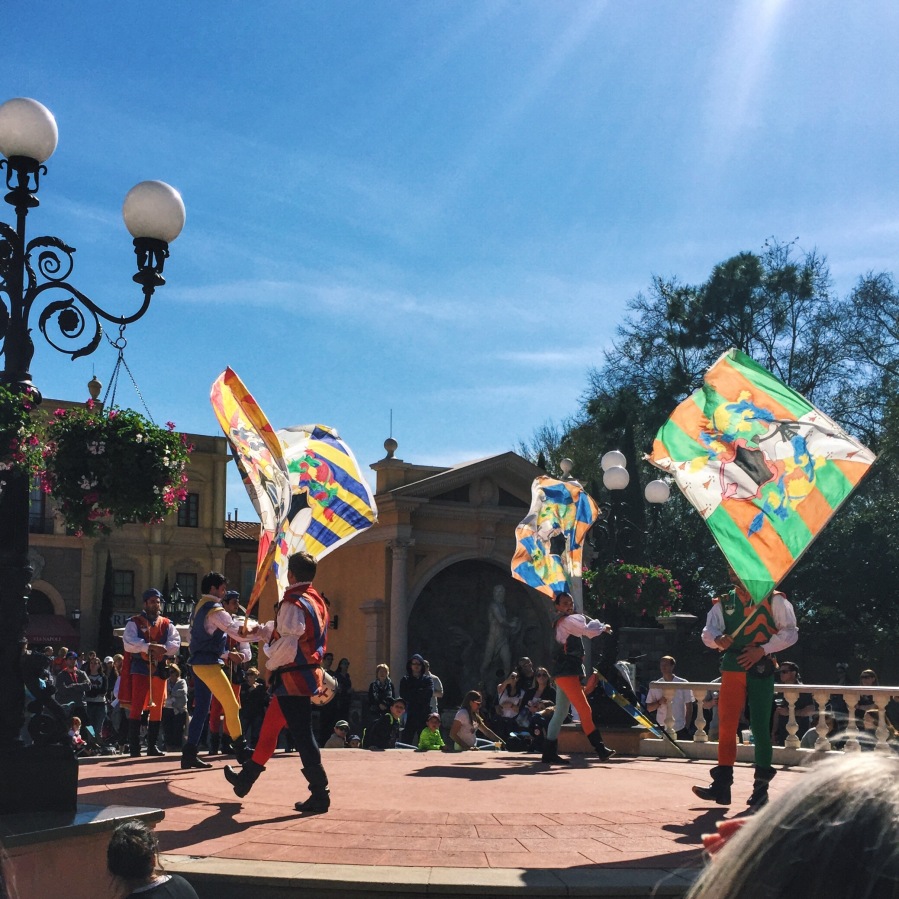 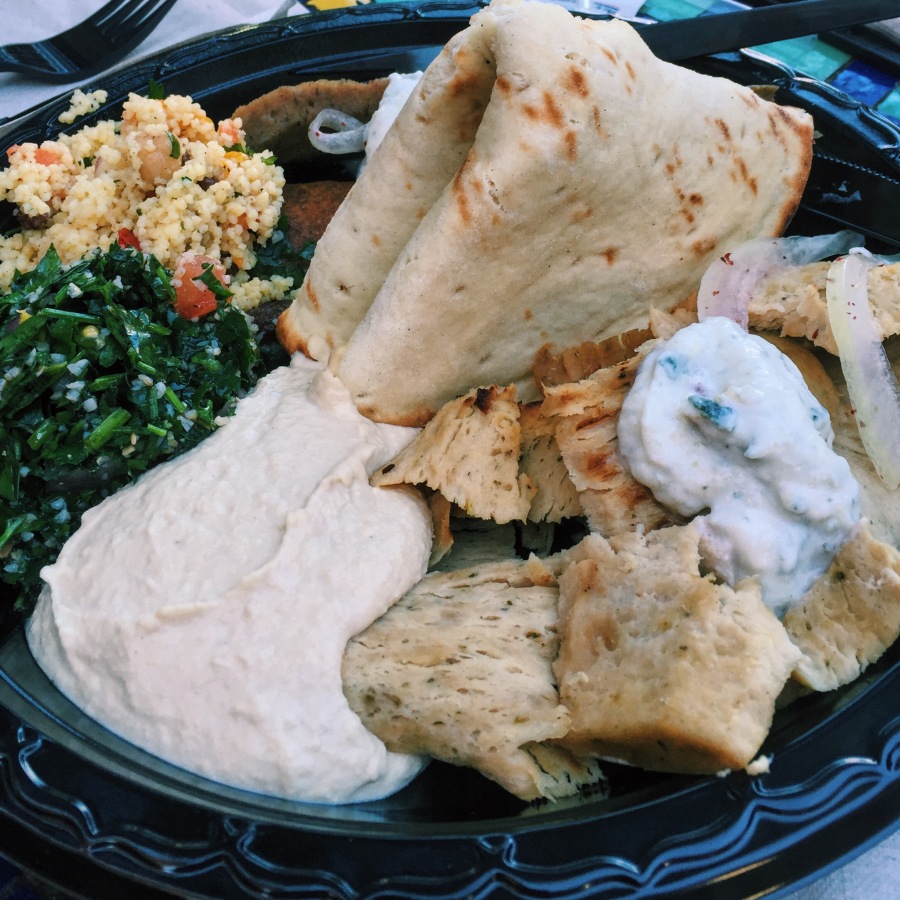 Minnie ears on our heads and drinks in hand, our day was all about enjoying one another’s company, belly laughing at things like “Bear Bum”, getting stuck in a phone booth, singing along with UK’s pub entertainer, and insisting on pictures with cute Italians. It was one of those incredible days you know you will remember for a lifetime [or not, depending on how well you held your alcohol]. And it all culminated with the beautiful IllumiNations fireworks show over the water. 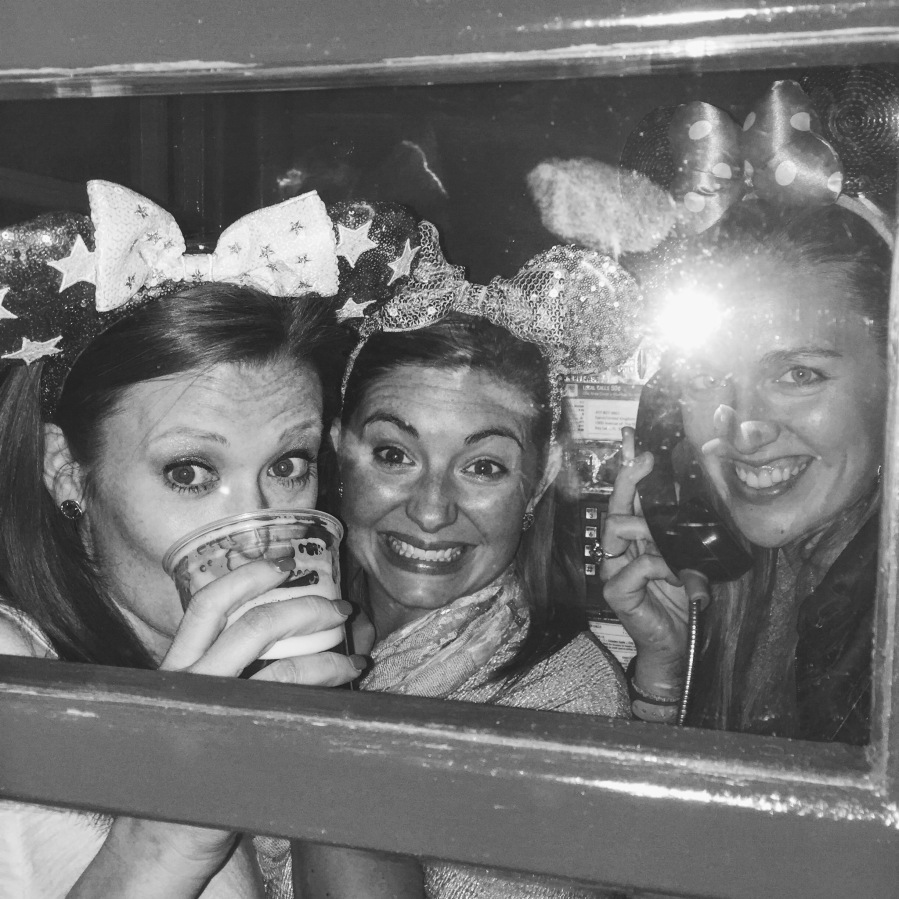 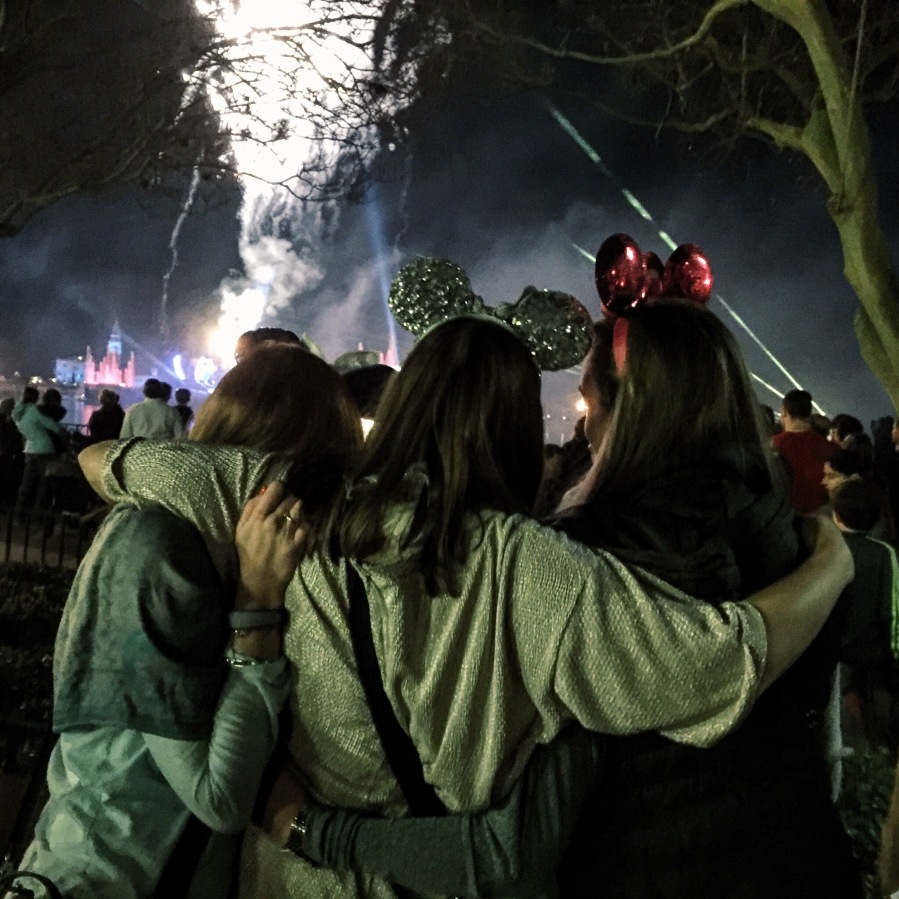 Our third and final day in Orlando was our reminiscing day in Magic Kingdom. Our friend, Alexis, was fresh off of an Orlando conference and joined us for the occasion, which was all about doing the things we remembered as children but insisted upon experiencing again as adults. Tea cup rides, Pirates of the Caribbean, the Carousel of Progress, Cinderella’s Castle, and Prince Charming’s Carousel… we had a day to release our inner children and we loved every minute of it [well, maybe not all of the strollers]. 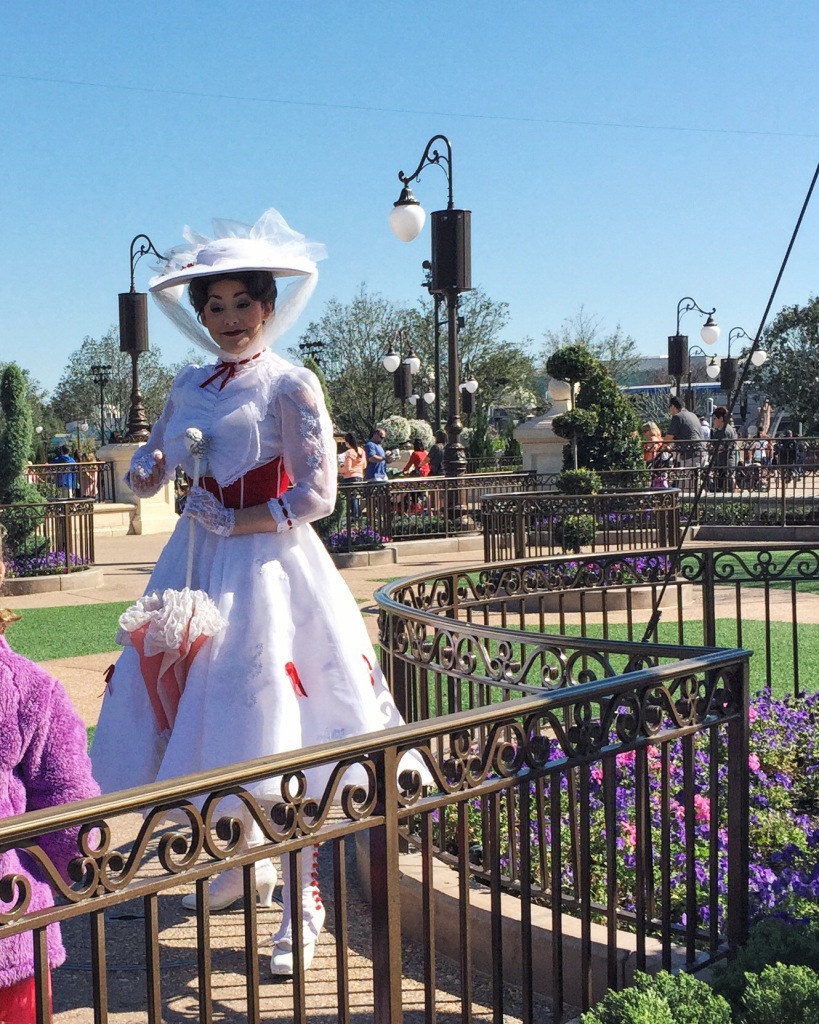 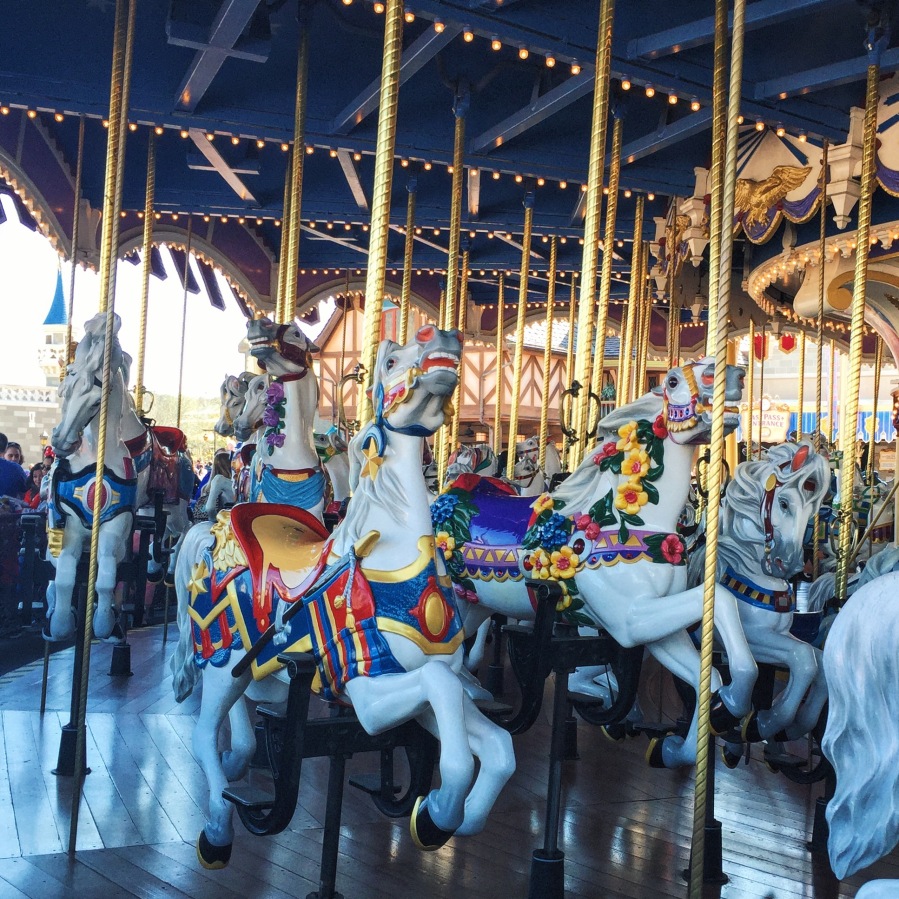 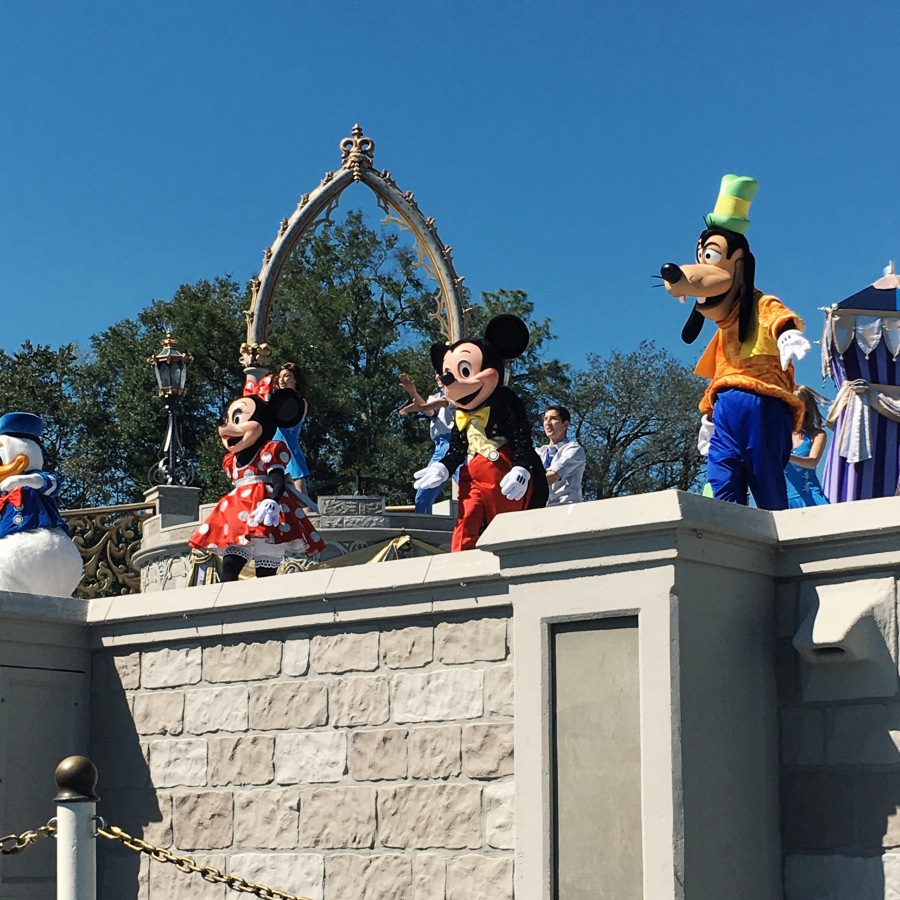 As I stated before, our “Elizabash” reunions are nothing short of legendary and this weekend was no different. Because even after 12 years of friendship, three decades of living, countless relocations, and weddings to the men of our dreams, we still know how to extract the most out of life, especially when our moms are involved! [A huge shout out to Valerie who is the epitome of abundant love, and my mom, who not only drank me under the table but also brought so much vivacity and joy to the weekend.]

Oh, and if you’re worried about Jason and the fact that he wasn’t there, don’t be. Liz’s husband Jack and her brother Peter, along with their friend Brad, all descended upon Denver and turned our home into a veritable frat house. With homemade pretzels, hikes around Red Rocks, and brewery tours galore, he came away this weekend feeling just as loved, exhausted, and euphoric as I did.